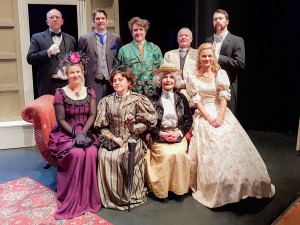 Ballyshannon Drama Society will once again travel to Athlone to take part in this year’s All Ireland Amateur Drama Finals with our production of ‘The Importance of Being Earnest’!

Having placed in all eight festivals, we have three Firsts, one Second and four Third places. Many thanks to everyone who has helped in any way to make ‘The Importance of Being Earnest’ an All Ireland finalist!

The finals begin on May 2nd in the Dean Crowe Theatre, with performances each night up to Friday May 10th, culminating in the gala awards ceremony in the Radisson Hotel on Saturday May 11th. We will compete against eight other acts, three of which performed at our own festival here in Ballyshannon in March: Butt, Corn Mill, Prosperous, Bridge, Brideview, Newport Players, Doonbeg Drama Group and Kilrush.

The draw to decide which night we perform in Athlone will take place on April 7th. Tickets will go on general saleon Wednesday the 10th of April. We will also have at least one more performance in Ballyshannon before we head out on the road for one last time. We’ll keep you posted!