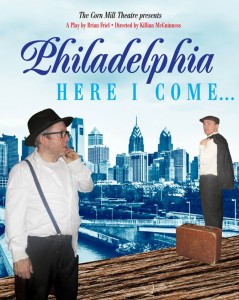 ‘Philadelphia Here I Come’ is a 1964 play written by Brian Friel. It is set in the fictional town of Ballybeg. It centres around Garet (Gar) O’ Donnell’s proposed move to America. Gar is protrayed by two characters, Gar Public (the Gar that people see, talk to and talk about) and Gar Private (the unseen man, the man within, the conscience). It’s essentially about exile, the exile of emigration, the exile of emotional disconnect, the exile of choosing security over love and the exile of living fantasy rather than reality. The play is a tragic comedy with many comical scenes.