Wednesday 15th sees the return of Letterkenny Music and Drama Group to our drama festival as they present Eugene O’Neill’s classic ‘Long Day’s Journey Into Night’. 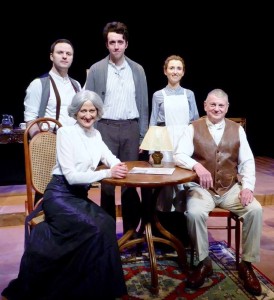 A semi-autobiographical account of O’Neill’s own upbringing, it tells the tragic story of the damaged and tormented Tyrone family over a long hot summer’s day in Connecticut in 1912. As the day progresses, they gradually come to terms with their addictions, their blame on each other and their own over-riding guilt as long built-up family tensions rise to the surface and threaten to destroy them.

Over the years it has been performed by actors as diverse as Jack Lemmon, Kevin Spacey, Laurence Olivier, Jeremy Irons, Vanessa Redgrave, Brian Dennehy, David Suchet, Laurie Metcalf and Philip Seymour Hoffman to name just a few with the most notable recent production taking place on Broadway last year with Gabriel Byrne and Jessica Lange in the lead roles.