Fully energised by the highly successful One Act Finals in December 2014, rehearsals continued in January for the year’s circuit production, ‘God of Carnage’, with director Anne Mc Hugh and cast Richard Hurst, Tony Liston, Rachel O’Connor and Trish Keane meeting three or four times a week in preparation for the months ahead.

The show opened in the Abbey Arts Centre in February, running from the 10th to the 14th, and was considered ‘a breathtaking and exhilarating experience’ by at least one well-known and highly respected critic. The Newtonstewart Festival on the 27th was the first date on the circuit, and it was a brilliant way to begin, as this was the first win for the play, with Richard Hurst taking home the Best Actor award, Ann Mc Hugh took Best Director, the production won the Audience Award along with acting nominations for Trish Keane, Rachel O’Connor and Tony Liston. 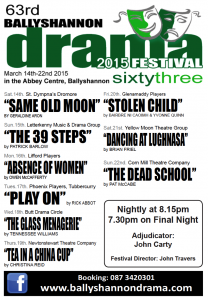 While ‘The God of Carnage’ toured the country, the 63rd Ballyshannon Drama Festival took place in the Abbey Arts Centre from March 14th to the 22nd, and was another outstanding success. John Carty acted as adjudicator for the week, and had a very difficult job choosing the winners in both the Open and Confined Sections. Letterkenny took first place in the Open Section with ‘The 39 Steps’, and Tubbercurry won first in the Confined Section with ‘Play On’. Frankie Mc Ginley, Ballyshannon Drama’s biggest fan, received the honour of a plaque in the Hall of Fame.

In April, the multi-award winning ‘God of Carnage’ returned home to the Abbey for two nights, the 27th and 28th, before the van was packed up once again and everyone headed to Athlone to perform in the All Ireland Final on the 30th. Words were exchanged, vomit was hurled, rum was poured, cigars were torn up, tulips were scattered, a hamster disappeared, all before a packed house in the Dean Crowe Theatre, which included many local fans who travelled to the midlands to show their support.

Cast, crew and supporters returned to Athlone for the awards ceremony in the Radisson Hotel on May 9th. The award for first place went to Palace Players, Fermoy, with ‘Conversations on a Homecoming’, and Trish Keane got a nomination for her portrayal of Annette in the Best Actress category. As a brief musical interlude before going to the Ulster Finals, Trish and Tale of the Gael visited Theatre 3 in the Abbey with their production of ‘The Life and Legacy of Lady Gregory’ on May 12th. On May 23rd, Ballyshannon Drama Society travelled to Newtonabbey to perform on the closing night of the Ulster Finals, and were delighted to receive the award for Best Dramatic Moment – The Illness of Annette, otherwise known as ‘The Puke Scene’, and with that, ‘The God of Carnage’ was left to rest…for a while!

June, July and August may have seemed quiet following the activity of the One Act Finals (December 2014), the Drama Festival, and the success of ‘The God of Carnage’, but a number of members made the annual pilgrimage to the Gormanstown Drama School. At home, there was a lot going on backstage, as society chairperson John Travers worked closely with Kinlough’s Phelim Rooney in Norway to bring ‘The God of Carnage’ to the district of Asker on the outskirts of Oslo.

All of this organisation culminated in 15 members of the society flying to Oslo on September 26th to present ‘Carnage’ for the very last time in the Kulturskole, Asker. There was much more to the trip than drama, however, as Phelim’s local amateur drama group treated the visitors to the best of Asker and Oslo – a scenic trek around the lake, motor and sailboat trips on the fjord,  a backstage tour of the Oslo Opera House with an unplanned rehearsal performance of ‘Carmen’, coffee with the Irish Ambassador, the Kon Tiki museum, the Viking Ship museum, dinner in Phelim’s home, and much more. The most treasured memory for all the visitors, of course, will  be the generosity and hospitality of the Asker drama group, with their boundless enthusiasm for drama, music and song. 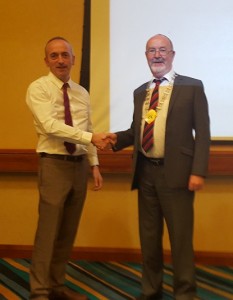 As if he had not been busy enough, in October  John Travers became the chairman of the Amateur Drama Council of Ireland, following in the footsteps of his father who held the office from 1967 to 1969, making all in Ballyshannon very proud.

Also in October, Anne Mc Hugh shared her skills and talent by directing the highly successful production of ‘Requiem for Julie’ in the Hawk’s Well Theatre in Sligo. Richard Hurst absconded to the Bosco centre for a few nights, performimg in ‘My Boy Jack’ with the Donegal Drama Circle.

At the AGM at the end of October, chairperson Betty Mc Intyre handed over the chains of office, after two years of devoted service, to Trish Keane. The meeting which followed was progressive and productive, as plans were made for the circuit play, a local production in the spring, and acting and production workshops to be held in Ballyshannon in the coming months.

Later that month, it was announced that Ballyshannon Drama Society once again intended to participate in the 2016 All Ireland Drama Festival with ‘Old Times’ by Harold Pinter, starring Richard Hurst as Deeley, Rachel O’Connor as Kate and Patricia Keane as Anna, with Conor Beattie as director. Since then, all the activity has been backstage and in the rehearsal room, with the assistance of Carl Duggan, keeping an eye on the script every night to make sure the actors don’t forget or make up their  lines! The show will open on February 9th in the Abbey, before heading out to eight festivals on the circuit.

In December several members of the society were kept busy with a range of local projects. Ailis Mc Intyre and Mary Daly produced and directed ‘Aladdin’, delighting adults and children alike once again with another magical show. Director Moya Ferguson kept the Ballyshannon Musical Society busy with rehearsals for the 2016 production ‘The Addams Family’ which promises to be a big hit, and will run in the Abbey Centre from February 23rd – 27th. Ann Mc Hugh began plans for a local production of Thornton Wilder’s ‘Our Town’, which will involve over 20 new cast members, in the hope that the Ballyshannon Drama Society will continue to grow and develop in 2016.